My battle with Writer's Block

I am currently suffering the most debilitating disease a blogger can have. No, it's not Starcraft II Fever, it's much worse than that:

Yep. I finally have my writing energy back...but what the hell do I write about? I currently have a few blog posts on the back burner (like, say, a few Soundtracks For Summers and a few more things), but I feel like I want to type something new for now. But what?

That's where you come in, folks!

I hereby proclaim this entry the "Beaming For Bunnies Idea Drive™."  I'm asking anyone to submit ideas for me to write about.

You can submit ANYTHING. Anything at all. Nothing is too stupid or esoteric! You can submit your idea in the comments below, send me an email (beamingforbunnies@gmail.com), submit something at the Beaming For Bunnies Facebook Page, or tweet your idea at my twitter feed USING THE HASHTAG #IdeaDrive.

Email ThisBlogThis!Share to TwitterShare to FacebookShare to Pinterest
Labels: Archives, Blogging, What Else is On?

Stuff on My Phone, Part 2

It's been a hell of a week, folks. My internet ended up dying over the weekend, and after a straight week of fighting with a new modem/router, it seems to be up and running for the most part.

I went to see The Daily show in Person (AWESOME). I went to go see Scott Pilgrim vs The World (EVEN MORE AWESOME. I also neglected to mention on here that I read the entire graphic novel series in a weekend and gushed about it everywhere else on the internet), AND saw Rifftrax Live: Reefer Madness (also incredibly awesome! Hilarious!)

But most of all, I got my writing chutzpah back! But now I have writer's block. That's just my luck. But fret not, my faithful readers, I got an entry for you tonight! Yes, many months ago I finally got a new cellphone, an LG Dare, and along with it, a memory card for all the awesome pics I got from it. Yes, that means all the burgers for my Summer Burger Challenge. BTW, the burgers on the initial list is COMPLETE. Yes, now all I gotta do is finish the sidequests, and you'll get that entry!

After the first entry of stuff on my phone posted...well over a year ago, and seeing Matt over at X-E clean out his inbox, it seems that it's about high time to show y'all some of the weird stuff that I found significant enough to capture on a 3.2 megapixel cell phone camera for all of eternity. 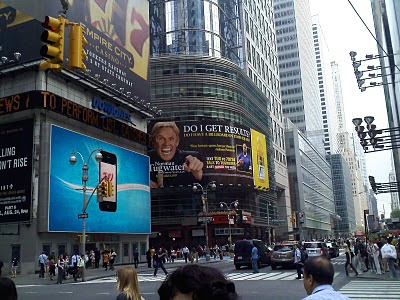 Snapped this one in Times Square just this past Monday. Its a gigantic billboard. Over the now-defunct ESPN Zone. Advertising Vitamin Water. WITH GARY BUSEY'S FACE PLASTERED ON IT FOR NO GOOD REASON. His giant teeth alone would make anyone stop dead in their tracks on the busiest crosswalk on the face of the Earth.

If you're wondering what that billboard reads, the first line (the one that matters) says "DO I GET RESULTS?" The line under it reads "DO I OWN A BILLBOARD IN TIMES SQUARE?" 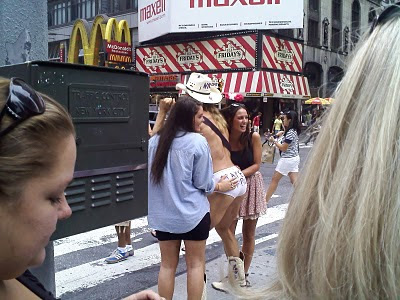 Speaking of Manhattan, here's an unrelated shot of the Naked Cowboy's ass. I literally ran into him before this picture was taken. Fortunately, from the front. 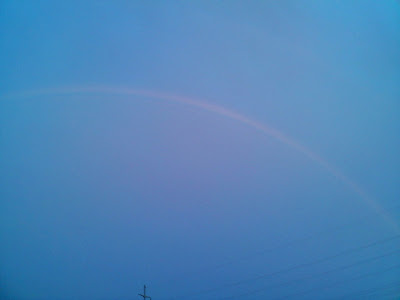 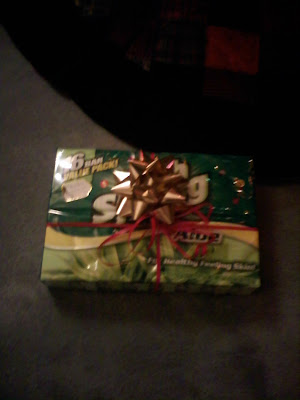 This was taken on Christmas Day. No, it wasn't under my tree, but this was under the tree at the house of a friend of my mom's. Mom's Friend's Brother (or MFB for short) was known as a guy who only used Irish Spring Soap so obsessively that someone wrapped a bow onto a whole box of it for a Christmas gift. He told me himself that it was the only thing he wanted this year. 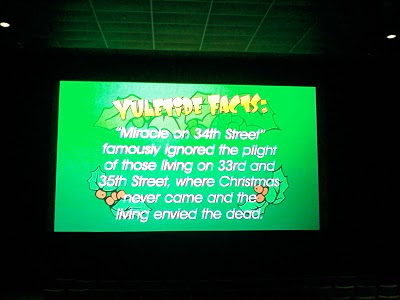 Speaking of Christmas, here's one of the title cards that played before the Rifftrax Live: Christmas Shortacular event back in December. The event as a whole was completely hysterical, and there were plenty of other great title cards like "Just Kidding, we're showing you the Star Wars Holiday Special Instead!" and "Movie Mistakes: Renee Zellweger is Frequently Cast as an Attractive Person." 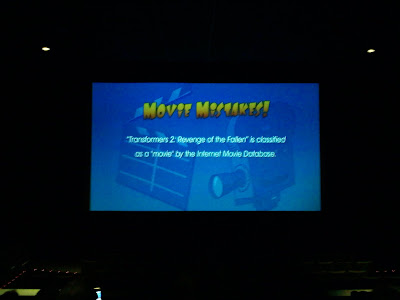 And speaking of Rifftrax, our final picture for tonight was taken just last night at the Reefer Madness event. It was the only one I was able to capture, as there tons of better ones like "Thanks to a Facebook Campaign, Betty White is cast in the Megan Fox Role in Transformers 3", "Movie Quotes: 'Release the Kraken!' Liam Neeson, Shindlers List (First Draft)", "(SLIDE ONE) JUST A TEST: LeBron James" "(SLIDE 2) SORRY FOR THAT, WE WANTED TO SEE IF WE CAN GET THE CLEVELAND THEATER TO BOO AT THE SCREEN", and my favorite "Movie Mistakes: The Last Airbender."

Part 19 in my ongoing "Soundtracks For Summer" series


Today we focus on the Guns 'n' Roses classic "Paradise City." It's a pretty damn good thing that this song was recorded during the original lineup's heyday, I can't imagine anyone else besides Slash wailing away at the guitar or sporting his awesome top hat. And thanks to his custom skintight pants, no one will ever reach Axl Rose's ear-shattering pitch ever again.

What this song does most for summer is give an anthem to the down-and-dirty party cities like Atlantic City, Miami, and PC Beach. There's booze everywhere, there are no laws, and all the women are pretty. Then someone calls someone's mom and all hell breaks loose and that's it for Spring Break. Thanks a bunch, Scott.

In previous entries, I talked about songs that defined the road trip itself as the best part of the vacation, like Holiday Road, Wanderlust King, and The Biggest Ball of Twine in Minnesota. A song like this, however, is about the destination itself. The REASON why you're taking the road trip in the first place. Really, with the amount of talking I do about the awesomeness of road trips, it seems that only part that sucks about it is the long ride home. And Scott. God, how I hate Scott.

BTW, I'm also taking reader submissions for future "Soundtracks For Summer" entries. If you've got an idea, pop me an email at beamingforbunnies@gmail.com OR comment on this entry OR at the Facebook Fan Page OR at my Twitter with the name of the song, and a reason or two why it defines "Summer" for you. You'll be glad you did.
Posted by Galileo at 8/13/2010 10:19:00 PM No comments: Links to this post

If you aren't aware of my spin-off blog "In 10 Words" (Don't worry. According to current statistics, you probably aren't reading it), the blog that sums things up in exactly ten words, well I've got good news from it.

It has reached 500 Entries. Yes, the magic #500 was reached in a little under two years. Granted, it's a few months behind 1000 Awesome Things, but any blog that goes beyond ten entries is considered a great success.

Click here to read the 500th Entry! And here's a little video celebrating this momentous occasion:

Email ThisBlogThis!Share to TwitterShare to FacebookShare to Pinterest
Labels: Blogging, Geekery, In 10 Words

Yet Another Blog Posting This Simpsons Picture

And now Part 53 in my ongoing "Making you Feel Old" Series: 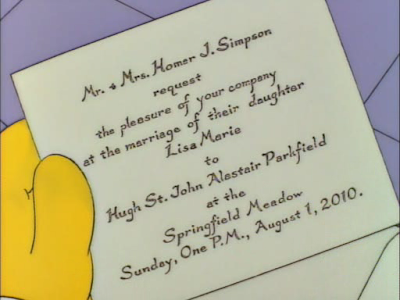 Now if you excuse me, I have to find the cure for 17 stab wounds in the back before I can thaw out Mr. Burns. Until then, I recommend you fine folks to discuss how Britain saved our asses in World War III, and how it's better to have a wedding in a church with God than in the cheap showiness of nature.
Posted by Galileo at 8/01/2010 08:42:00 PM 2 comments: Links to this post