This past month has had its ups and downs, but I always manage to make time to write an entry for this blog, once a month on the last day, at the dead of night. Like clockwork.

February is when I celebrate the blog's birthday, and I was combing through the archives earlier, and I realized something: Yesterday, February 27th, was Beaming For Bunnies' TENTH BIRTHDAY!

This is simply an unreal milestone. A lot's happened in ten years. People were born, people died, Idiot Presidents were replaced by better presidents, then replaced by a bigger idiot, you know the deal.

It's been so long, that blogging isn't much of a viable platform of online expression anymore. Hell, Blogger itself is pretty much obsolete, the mobile app (which I used to update this site for a long time) stopped working about a year ago. And I only started here because it was free, it was easy to use, and more legitimate than Myspace blogging. Thankfully, that old blog is lost to time.

The rise of social media, especially Twitter and Instagram, changed how we communicated our nerdy interests to the rest of the cosmos. No longer do we see anything composed, thought out, or properly formatted. Just pictures and strings of 140 (and now 280) characters are enough to get the point across. Hell, it's certainly killed my patience for writing, and it's a damn shame. The immediacy and (former) brevity of Twitter was a game-changer for all of us. What took me hours to write down my thoughts, I could now do in minutes. And with smart phones showing up, I was no longer tethered to a PC, and could blog from my pocket.

It really doesn't help that formatting this thing changed several times over the years, making posts look uneven and weird. Seeing all my embedded videos being blank and robbed of context also makes me sad as hell, but that's time for you. And remember blogrolls? Ah, good times. I finally updated it after a few years.

These days, "blogging" is usually reserved for scorn, from film critics, to political mudslinging, and, more positively, to my dear friends at Dinosaur Dracula, who not only inspired me to start writing in the first place and continues to inspire me to this day, but it still going at it for at least the last 15 years.

Here's the link to the very first entry! It was so tiny!

Here's some of my favorite entries of the past ten years:

The Soundtracks For Summer series!

The Greatest B-Stories From The Simpsons

The Dennis series! Especially A Very Dennis Thanksgiving Special! and A Very Dennis Christmas Special! Man, I had like 5 arcs planned out for the Dennis adventures, and only got two entries into arc two and never went back to it. I think that I couldn't break the story for Arc 2, and that might be why I stopped updating. And back then, actually taking all the pictures and uploading them was a much bigger pain in the ass than it is now.

Arc 1 was a Christmas adventure starring Dennis and some Transformers (complete!). It was inspired by X-E/Dino Drac's old Plymobil Advent Calendar adventures of old.

Arc 2 was going to be about a new group of Decepticons taking over and a new MacGuffin hunt.

Arc 3 was about time travel and fighting Daleks. I bought a lot of Dalek toys for this, and they've been collecting dust. LEGO James Lipton was our stand-in for The Doctor.

Arc 4 I honestly forgot was gonna be about. Maybe fighting Thanos and other Big Boss villain toys I had? I foresaw a Legion of Doom. Since the last entry was from 2012 and Nekron from DC's Blackest Night being told to buzz off, I'm more than sure he was gonna show up here and be the big bad.

Arc 5 was the final arc, the Macguffins from arcs 1 and 2 leading to the final boss, Unicron.

The Better Know A Christmas series

The Best Cosplay I Ever Saw

Be A Good Neighbor

Anything Can Happen At Comic-Con

And finally Blog-A-Day, where I wrote an entry every day for two straight months.

Youtube links are likely to be dead, you have been warned.

Before I say anything else, lemme tell you stuff about my own February: 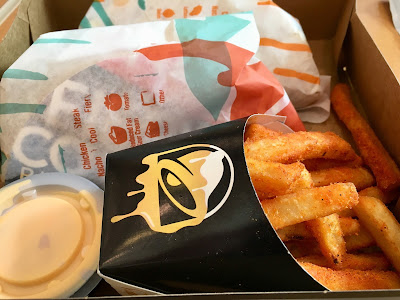 I finally got to try Taco Bell's Nacho Fries! Well, to be honest, they're okay at best. They don't really taste like anything, and Taco Bell tries to make up for it by covering it in Dorito dust and giving you nacho cheese to dip it in. I've had better fries...but I've also had much worse. I'll be honest that I've never been a fan of fries with gimmicks. I don't want to season them, I don't want gravy, I don't want aioli or whatever the hell that is, don't waffle them, no truffle oil, and especially no sweet potatoes. Just give me potatoes cut into sticks and some ketchup, sometimes ranch or Russian dressing, and that's it. And be good!

You know what? Here's my favorite kinds of fries: 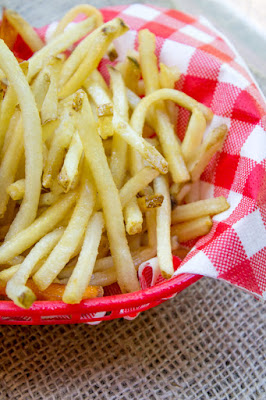 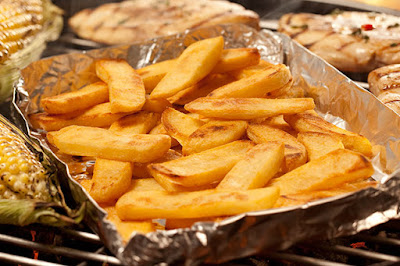 The fries from 5 Guys 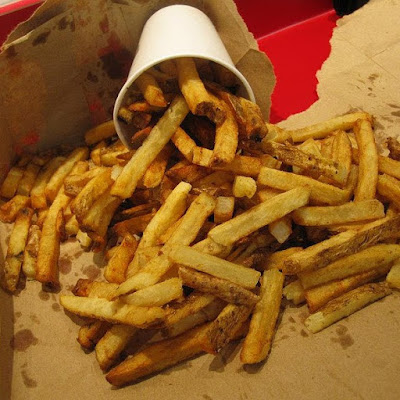 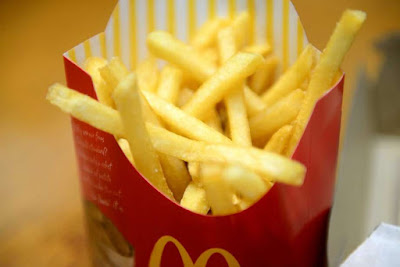 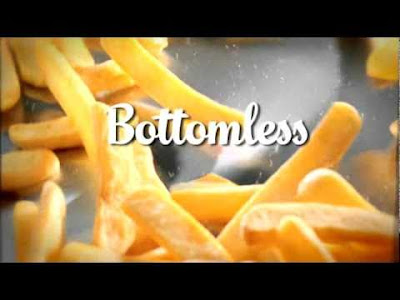 Speaking of disappointment, I missed out on seeing the Weinermobile the other day. 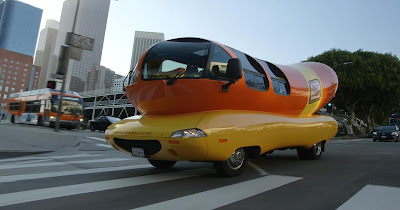 I was at work last Friday, doing my thing, and one of my friends on Instagram mentioned that the Oscar Meyer Weinermobile just happened to be parked at a nearby Wal-Mart. Like...pretty much across the street from my job nearby. And I only found out about it around 7pm, well after it left for the day.

Is it weird that I got profoundly sad about that? It's just a giant car shaped like a hot dog, but seeing it in person has been on my bucket list for a good part of my life.

I also forgot that Szechuan sauce came back. 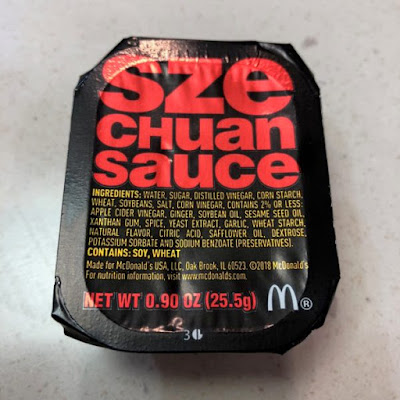 A year ago, Rick and Morty reminded us all that McDonalds had Szechuan teriyaki dipping sauce back in 1998 to promote Mulan and that it was supposedly the best sauce ever created. Unlike something like the Arch Deluxe, this was a McDs promotion that flew under my radar for whatever reason. But since that episode aired, I, like everyone else on the internet, wanted to try it for themselves.

It came back briefly last October, but since I was at NYCC when it came back and knew every McDonalds in the city was gonna be crazy for the demand for how few packets there were (spoiler: it was), I decided it wasn't worth the hassle. But a while ago, McDonald's announced that the sauce was officially making a (limited) comeback on Monday, February 26th.

Well, Monday came and I was even at a McDonald's for lunch...and I just plain forgot about it. I saw so many people with the sauce, and I just forgot about it! It's Wednesday now and it's a miracle if there's any left. I've made my peace with it, I don't even really like teriyaki sauce anyway, and my curiosity would just lead to even more disappointment. It's like Rick loving an obscure terrible flavor of something was a joke in and of itself.

Before I bum myself out again, here's something cool: 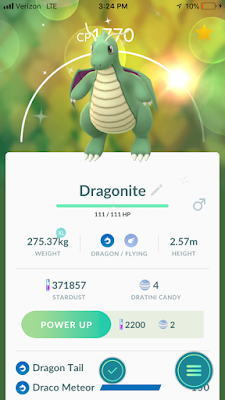 Last Saturday was Community Day in Pokemon Go, and the special Pokemon they were giving away was Dratini. And, oh my god, they were EVERYWHERE. Three straight hours of catching as many as I could, and I even encountered a few shinies! 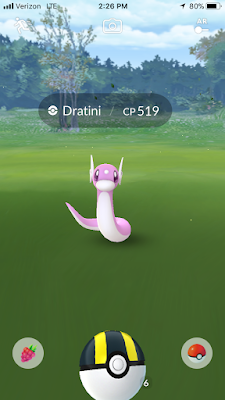 Four of them, to be exact. And I managed to evolve three of those, and two others, too. 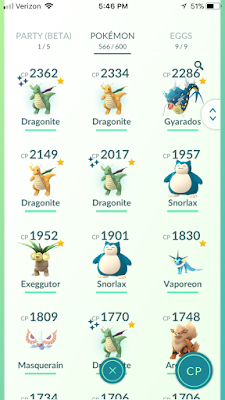 As you can see, I don't have a lot of strong Pokemon, but now I have a small army of Dragonites to give me a leg up on the competition a bit.

So what plans do I have for the next ten years? Gonna be honest, I'll be shocked if Blogger itself lasts longer than a few more years.

In more realistic hopes, I want to start up a podcast. I want to talk about forgotten cartoon shows, especially Saturday Morning cartoons from the 80s and 90s. Sure, there's lots of podcasts talking about cartoons these days (my favorite being We Hate Movies' Animation Damnation), but either they suck, or they don't update frequently enough, which is perfect for a guy like me to swoop in and fill that niche. Stay tuned, people!

So happy ten years, Beaming For Bunnies. You aren't dead, and I hope to keep writing in you. 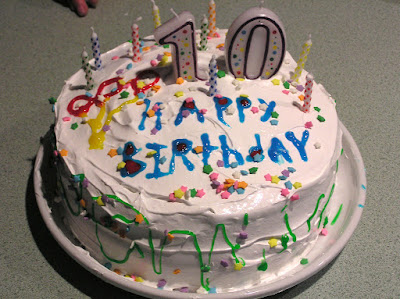