Flea Market season is upon us once again, so last week I went down to the Bellmore Train Station once again for their weekly flea market. This time, however, I ended up arriving around 12:30, a bit late in the day. It didn't help that it started to drizzle, which was a fine prompt for vendors starting to quickly pack up as soon as I got there. I thought all the good stuff would be gone, but I was wrong. I was so happy to be wrong. 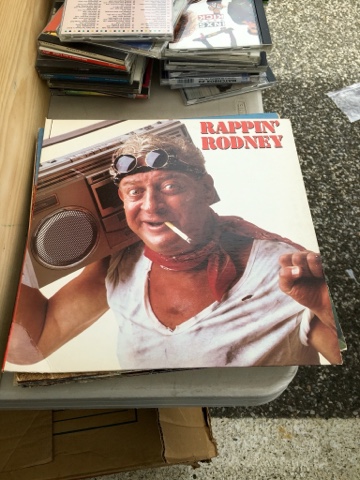 I might be burying the lede here and I might be using hyperbole but this was by far one of the best things I have ever found at this flea market. The famous Rappin' Rodney album! Back in the day, rap was the new music thing, and old fogies that tried desperately to be hip to the kids attempted to insert raps whenever and wherever they could. The most well known of these fogies to dip their toes into this craze was Rodney Dangerfield.

Even in the rap game he gets no respect. If you've been following this blog, you'll know my weakness for silly novelty albums, and this is as novelty as they come. Here's the back. As much as I'd like to find out what "Rodney Continues Rappin'" sounds like, I had to leave the album there. I don't collect vinyl and even if I did I don't have anything to play it on. You have my permission to act disappointed in me. 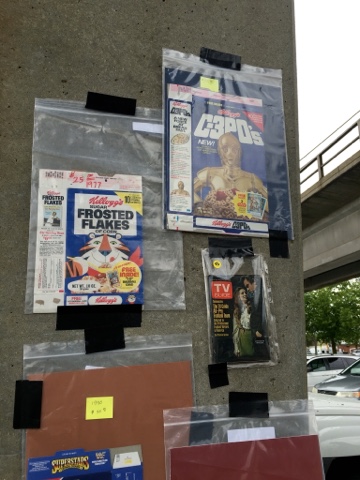 Oh crap, vintage cereal boxes! Just the boxes. If I were to pay the 35 bucks for the C-3PO's, I wanted to make sure the hideously stale cereal came with it. 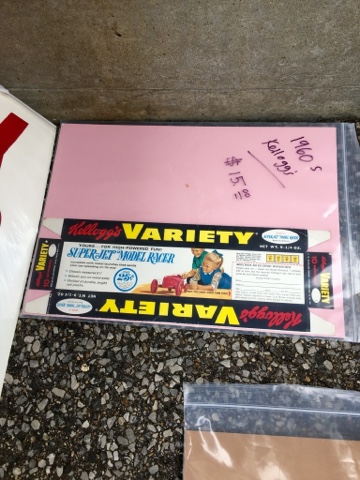 Same goes for this fifty year old box of Variety cereal. I'm actually amazed that the little boy on the box was letting his sister play with that model racer. Seemed pretty progressive for its time. 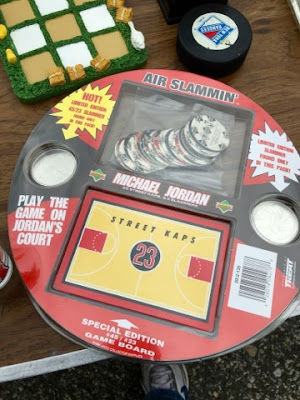 Everyone was into the POG scene back in the day, and it seems that Michael Jordan was no exception. I was never a fan of officially licensed pogs, I was always more partial to random nameless ones like these: 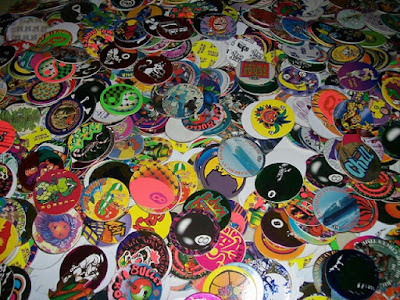 Like these. Sadly, this is not my personal collection. Hell, I don't even know what happened to all of mine. For all I know they're all in some storage bin in one of my closets.

It's even lamer for some officially company (in this case Topps) to try their best to create their own rules out of the classic "stack them all up, then slam them with a slammer and you keep whichever ones land face up" game that nobody really played to begin with. 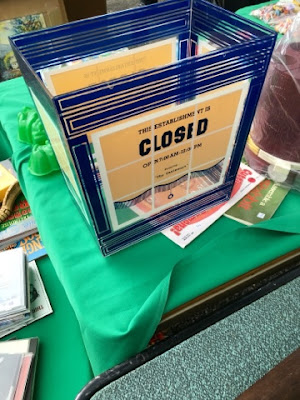 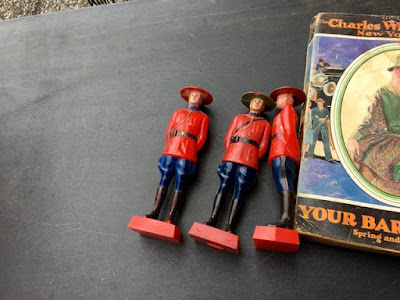 Own a set of old, plastic Mounties! Yeah, I don't know why I took a picture of these. Maybe because finding anything to related to Mounties in the states is enough to stick out? 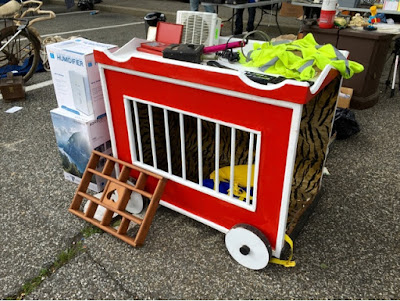 A kid bed that doubles as a tiger cage! At least I think it's for kids. No matter who sleeps in that, I guarantee that they'll be uncomfortable in it. 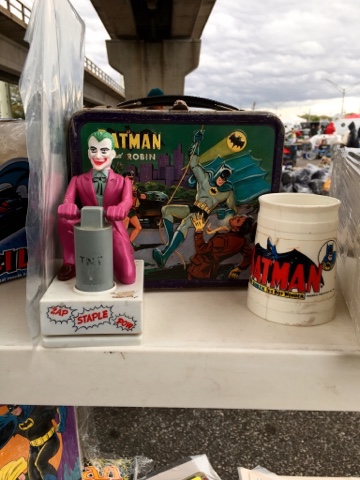 This booth was full of cool, vintage Batman stuff. Unfortunately it all looks like it's seen better days. Such is the gamble of the flea market. See, here are those political campaign buttons I keep telling you guys about! Losers and everything! I'm actually sad that I'm just now paying close attention to this set, because there's some pretty old ones here, like ones for Taft and Coolidge and Woodrow Wilson. And you can't forget famous losers like Goldwater, Dewey, but no Ben Carson just yet. Stay tuned. 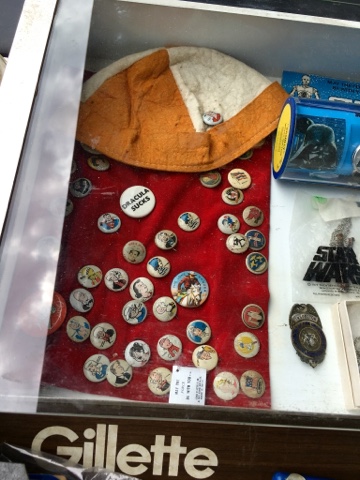 Above those buttons were some pretty rare vintage buttons for old comic strip characters that no one remembers! Maybe Gasoline Alley? Dick Tracy? Thimble Theater? I know that I see Little Orphan Annie's style in a bunch of them. I'll admit I was drawn to that rebellious "Dracula Sucks" button. 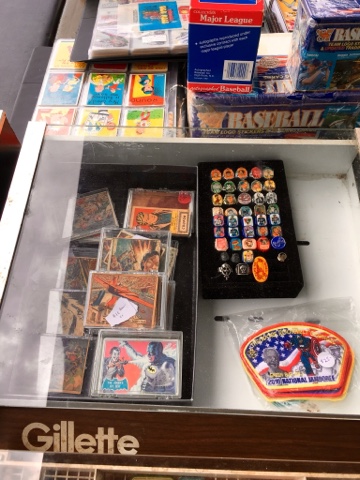 That sane booth had loads of old vintage stuff that once again I'll admit to paying attention to the wrong items. I'm sure I was drawn to the awesome vintage Batman cards, but look at those funky rings! You gotta zoom in, but there's something for everyone: Three Stooges! Howdy Doody! Mickey Mouse Club! JFK! Elvis! I even spy ones for Soupy Sales (kids show host from back in the day), McDonalds, even something for the Jerry Lewis MDA Telethon. 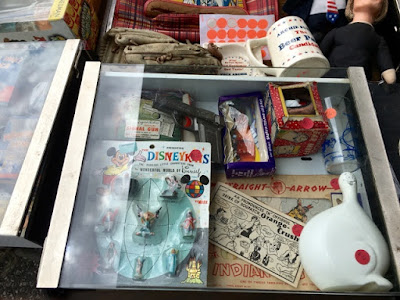 Something that really caught my eye was in this picture. No, not the $30 Schmoo on the right. If you're wondering what that is, Schmoos are characters from an old comic strip called Lil Abner. They were white blobs that were meant to be "all purpose animals." They were docile so they could be kept as pets, but every part of their body was useful. They dropped dead when you looked at them with hunger (yeah), and being boneless you could cook it for a hearty meal. Or you could cut the skin to use for shoe leather, or use their eyes for buttons. And for some reason they were cute enough to become cultural sensations, essentially on the same level of fame as Snoopy or Garfield. This is all real folks. All from a comic strip about a simple hillbilly town.

What I was interested in was that set of little Marx figures of various Disney characters from what I'm assuming was the fifties (note the Sleeping Beauty castle in the corner). Not only are the character choices odd (The Master? From Dumbo? Seriously?), the colors are all off. Back then nobody really cared about screen accuracy, and you weren't gonna complain about having the only physical figure of Panchito from Three Caballeros (I know I would've). But at $125? I'm gonna say no to that. 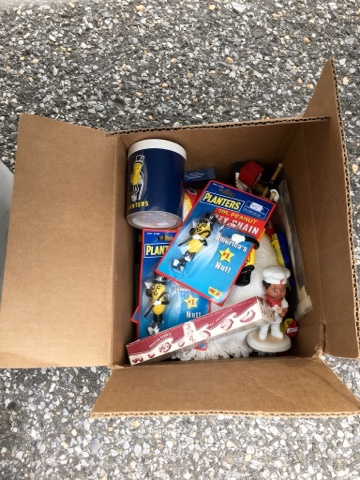 Mr. Peanut stuff! All stuffed into a box for easy pickings! As far as food mascots go, Mr. Peanut is pretty far down my most wanted list, but all that merch in one place is interesting enough. 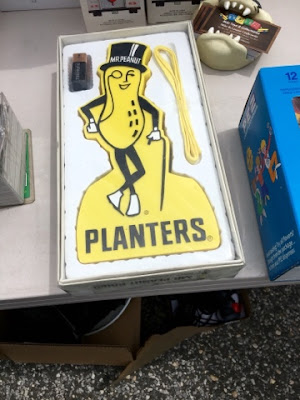 When your establishment had to get red of cigarette ads, I guess this Mr. Peanut light was a sufficient replacement. 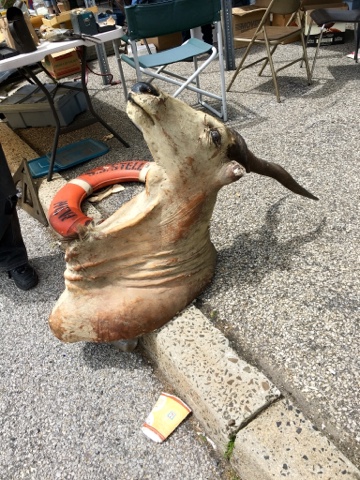 If this wasn't already dead, I'd swear that it's giving me the kind if look that'd be begging me to put it out of its misery. 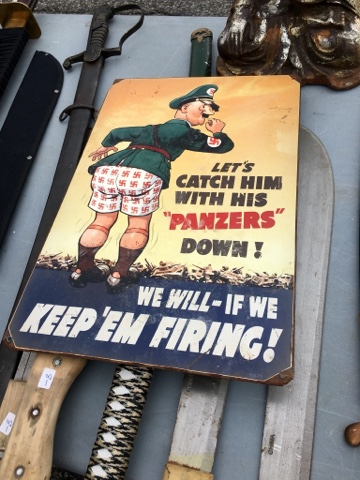 Propaganda from when Hitler was just the crazy German guy with the silly mustache and before we found out about all the atrocities was just plain silly. I honestly would've gotten it but it was too rusty. Yeah, that and I really don't want to explain owning that. This is coming from someone that has a signed print of Discord from My Little Pony: Friendship is Magic framed and hanging on their bedroom wall for all to see. 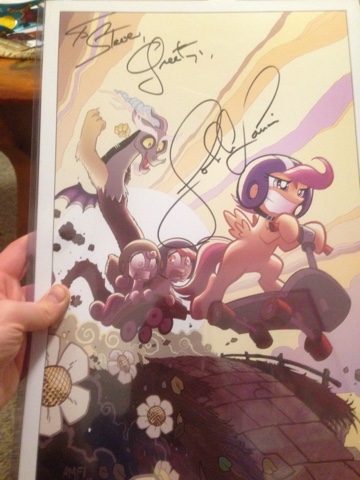 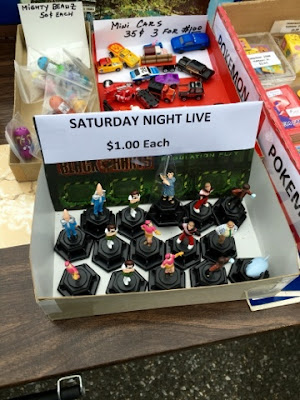 Never even knew they made Heroclix of various SNL characters. Couldn't have been from no later than 1999, they have the Ladies Man and Mango there among the Coneheads and Land Shark. 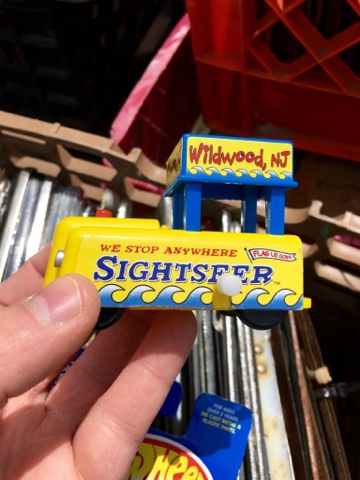 Now here's one of the most unusual things I found that day. A windup sightseeing cart from the Wildwood Boardwalk. How a little thing from Wildwood New Jersey ended up in a box of old Hot Wheels at a flea market in New York is a mystery that I'm not gonna solve, all I do know is that it came home with me. 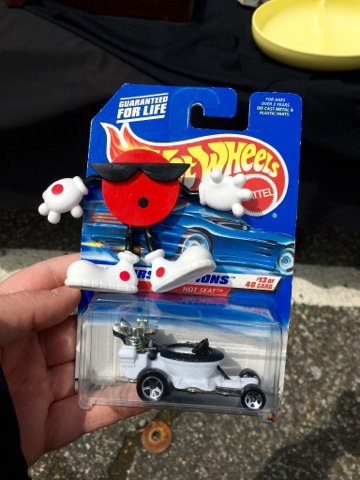 And here's the other things I bought. You folks are probably aware of my other weakness for weird Hot Wheels cars, and I couldn't turn down a toilet car. Every time I think I find the weirdest car Hot Wheels ever made, I come upon Hot Seat. It's from a few years ago, so the blister pack isn't in perfect condition but frankly I didn't care.

I also found a tiny bendable figure of one of my favorite advertising mascots ever: the 7Up Cool Spot! Yes, I hold this guy higher on my most wanted list higher than Mr. Peanut. Much higher. For one, I never thought I'd find a little figure of this guy. Now I imagine it coming to life Toy Story style to mess with my non-7UP sodas when I'm not around.