I couldn't let the big spooky day go by without a post, now could I? Sure, I'm making it with the skin of my teeth, but seeing how Daylight Savings Time is at 2am, I'm taking full advantage of that extra hour.

Last year I posted a list of Songs that defined Halloween. After much thinking, I decided thatt I should show off some more spooky tunes!

Alice Cooper rocks the socks off the ghouls and goblins of the night with kickass tune about Frankenstein, and how it's the greatest Universal Monster in the land. Also, Frankenstein is his penis.

You can't define "Halloween" without good ol' "Rocky Horror." And nothing gets the hips going at any Halloween party or Rocky Horror bash quite like the eponymous "Time Warp." It's just a jump to the left. And step to the right. We all know how it goes. Also of note is how "Sweet Transvestite," belted out by the great Tim Curry, immediately follows it.


Anything Can Happen on Halloween - The Worst Witch

Speaking of Tim Curry, there's also this now-legendary song he sang in the forgettable halloween special "The Worst Witch." It's pretty much the dumbest, campiest Halloween song I've ever heard, but Curry makes it awesome. You can find a hilarious review of entire special here at X-Entertainment.

Ah, "Tubular Bells," or how others know it: the theme from "The Exorcist." It's music like this that defined modern horror. Something's just not right when you hear this playing, and I usually whip out the plastic I take to Gallagher concerts to shield myself from any projectile pea soup.

Here's a video game theme that oozes "creepy" and "end of the game" music. Which was then followed by the less creepy but more definite end-of-game-boss sounding True Smithy Theme (8000 hp! Damn). Either way, if felt that you were in for one hell of a battle. Very awesome of the composers of Super Mario RPG to compose unique leitmotifs to every major event in the game (Bowser's Keep, Booster's Tower, Smithy's Factory, Mid Boss, Definite Boss, Sunken Ship, etc) while keeping most of them as remixes of the main 4 levels of Super Mario Bros.

While we're on the subject of video game music, here's the theme to Silent Hill. I shudder just hearing it, even though I've yet to play any of the games. Pyramid Head, stop humping Nemesis!


When You're Evil - Voltaire

Don't know who Voltaire is? If you've ever watched "The Grim Adventures of Billy & Mandy," you may have seen the episode where giant meteor crashes to Earth and makes Billy seeks out brains for it to eat in a dual parody of "Little Shop of Horrors" and "Thriller," or even the TV movie "Big Boogey Adventure," where he performs the awesome theme song. That's him. Most of his songs deal with the strange and the macabre, with some tongue firmly planted in cheek. This song exemplfies the Black/White that is stereotypical "Evil."


And, to cap everything off, here is the scariest song I can find:

Halloween is at the end of the week, and I'll admit that I haven't been feeling too spooky this year. Perhaps it's that I'm out of college and thus, no annual Fall Fest to wear a costume to. All I have is my job, and even then I have no ideas. I've been considering to finally buy one of those over the top pimp hats and just wear it on my shift on Saturday and simply pretend it's not there.

Then there's the spooky movies & shows. The only thing I have under my belt this year? Zombieland. 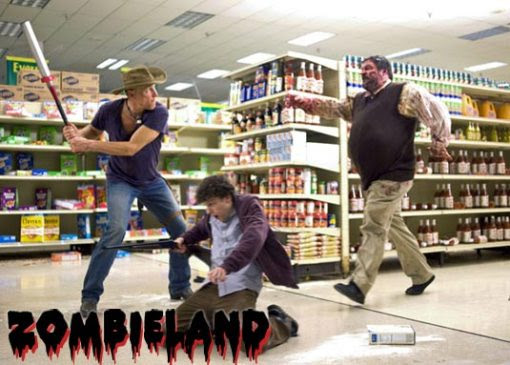 ...and that's it. Granted, the movie was awesome, but that's all I've seen this year. Hell, I'm pretty sure I missed this year's airing of The Great Pumpkin. Sure, I've seen Charlie Brown get a rock dozens of times already, but it just doesn't feel like Halloween without it. (EDIT: It turns out I didn't miss it! The spirits did it all in one night! I mean, it aired the day after I wrote this!)

So, I decided to get my spook on by going to Great Adventure via my college's annual Fright Fest Trip. A place where the scariest things...are the prices! Hahahahaha!

As it turns out, a forecast of rain drove away any potential crowds, meaning no lines for anything! Except Superman: Ultimate Flight, but even THAT had a 15-20 minute wait. The newly rechristened Bizarro was a main highlight of the trip. Medusa, the first floorless species of roller coaster, had been aging in its ten year history, but a blue paint job, retheming the ride to classic Superman villain Bizarro, and the installation of speakers, mist cannons, and fireballs did that ride good. What was once a "meh" inducing ride that had seen better days has now taken a level in badass and is completely awesome once again! I managed to ride the back row, and then immediately into the front row, and then once again at night. Awesome, especially with no waiting.

Of course, there were the other rides: Nitro (again, was able to get successive rides in front AND back rows with no wait), both sides of Rolling Thunder, Dark Knight (whose only wait was via standing through the 5 minute preshow!), Batman, and El Toro three times, once accomplishing that holy trinity of "Awesome Wooden Coaster, At Night, with a rained-on track, providing more speed). Did I mention no waits whatsoever, save for Superman? I almost rode Scream Machine, but seeing a train get stuck on its mid-point brake run...twice put the kibosh on that. Kingda Ka was up, too, but the rain and wind forced it to act like the tempermental bitch that it was.

I also got on Skull Mountain, accomplishing my goal of riding every coaster in the park. It only took me 4 years to do so.

But when the sun went down and the ghouls attempted to come out, but alas, even zombies hate the rain. And I'm not talking about the light sprinkles that showed up throughout the day. I'm talking about downpours that disintegrated even the cheapest of plastic ponchos. It made it quite difficult to re-enact Zombieland's climax, especially since I got my gun confiscated at the front gate. But I managed to do it anyway, even as Harley Quinn's dysfunctional family reunion tried to pie drenched parkgoers in the face. As the rain haad the absolute gall to cancel the Dead Man's Party twice, the trip made a unanimous decision to get the hell outta there. The topper came when, around 9 and everyone was in the parking lot, a flash of lightning appeared not 100 feet away from us and caused a blackout.

Sucked to be the people who were actually on some of those rides, but if there was an omen to tell us to leave, that was a damn good one. I was rightfully spooked, and I'm happy to announce that my spookiness is back! On to watch Homestar Halloween toons for the rest of the week!
Posted by Galileo at 10/26/2009 10:03:00 PM No comments: Links to this post

You know, watching the trailer for "Paranormal Activity" reminded me of something that seriously grinds my gears:

I fucking hate commercials that show the audience outside the theater and saying how good the movie was. The people, usually girls in large groups, say stuff it was "AWESOME!" or "BEST MOVIE OF THE YEAR!" or even "MADE ME DANCE IN THE STREETS, SAID DICK PATRICK OF THE LA TIMES!"

This isn't limited to movies, either. I live on Long Island, so I see ads for Broadway musicals all the time.

At least Spamalot made fun of this when they did it.

It's giving unnecessary hype to a movie that CLEARLY needs it. Notice how they never do those type of commercials for movies that are actually GOOD. And they're usually kid's movies, too. You'll never see Pixar or GOOD Disney movies use this, it's usually the Country Bears, or some other non-Disney flick like Hoodwinked or the live-action Alvin & The Chipmunks movie. And they'll always, ALWAYS show these ads at least the 2nd or third weekend after their release.

"They're not seeing the movie!"
"Let's pay actors to gush on how they don't mind giving generic compliments to the movie! That'll drive attendance!"
"Brilliant!"

...The reason why you don't see more videos that describe this phenomenon is that...there aren't really any on Youtube. That, and it's a pretty hard to describe term to search for.

For a movie I DID recently see, Zombieland was pretty awesome. I'm not a fan of zombie/horror movies, so the first five minutes was a little...nausea-inducing and full of nightmare fuel, but I got through it and I'm glad I did. If you're a horror junkie, or just think that The Tar Monster is your favorite movie character ever, this should be no problem for you.

It was pretty much an American version of Shaun of The Dead: Woody Harrellson in place of Simon Pegg, a variation of "the infected" in place of traditional zombies, a "will they/won't they" romance bet, usage of a Hummer, and scenes taking place in Texas and an amusement park in California. There was even a cameo by Bill Murray! (Btw, I apologize, because that's the only thing that amounts to a spoiler to the movie). By the way, I am in no way using that as an insult. It pretty much IS what the US equivalent of "Shaun" would be like.

If I had any negatives about this flick, it would be that they used "the infected" as zombies, and that there was no shout out to SotD with the usage of a cricket bat. The scene in the grocery store has him whack a fat zombie with an aluminum bat was awesome, but it just wasn't the same. An In 10 Words entry can be found here.
Posted by Galileo at 10/08/2009 10:26:00 PM No comments: Links to this post