It's that time of year once again, dear readers.


No, shut the hell up! But yes, it's Thanksgiving and around this time I tend to jot down the stuff I'm thankful for the past year. This may be the first year I seem to actually be thankful for something! It's almost December, so I better make this count!

This year, I'm thankful for the following:

1) My family, friends, and brothers.

This is obvious. I'm glad that each and every person I know, well, knows I still exist. I like that.

Yes, you. You read this, giving these random drabbles meaning! Thank you ever so much!

2) I got out of Hurricane Sandy safely.

It was already a month ago, but I still feel blessed that Sandy only took out power and some trees where I am. My hometown was one of those towns that made the front cover of Newsday after the storm hit...because Sandy performed a magic trick and made a chunk of it disappear.

Thankfully, I'm back up and running and posts SHOULD be coming out at regular intervals soon. Christmas is coming, after all!

3) The job that I currently have.

I mentioned it before, but back in March, I got a job as a vendor for King Kullen after eight months of not having a job. I pack out the Health & Beauty Care aisle, order the stuff, change up the endcap thing at the end of the aisle to show off the things on sale, what have you. But the best part of this job?

The money. Yes, I'm incredibly happy to finally have a job that pays me money. "I Can Live on This" money, too! I don't have to worry about funds or anything, either. The best part is, I'm single, so I have a shitload of disposable income! And, umm, I've since gone crazy with it. Over the summer, I went Transformers crazy, probably spending close to $400 worth. I can't help it, the Prime and Generations lines are awesome! And when I get all of the figures that Hasbro put out...new ones start showing up! It's an addiction, I tells you!

Okay, okay, before I digress, there's a bunch of other positives about this gig. I'm not tied to a schedule, managers, anything really. So if I ever get the urge to say "Screw this, I'm outta here!" I can actually say screw this and leave! It's so great!

4) And finally, I'm thankful for this picture: 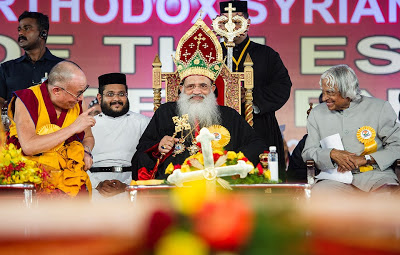 This sounds like a setup of the best joke ever. The Dalai Lama, Indian Doctor Evil, and Fred Armisen dressed as the Pope walk into a bar...