Last week I took a trip that I've been wanting to make for years now: Go to Six Flags Great Adventure in Jersey, but doing it solo. Sure, I've been to the park several times in the past 12 years, but I've never made the journey alone. If you remember my past trips to The Big Duck, the Montauk Point Lighthouse, and even to Boston, they were secretly training missions for enduring a solo car ride across state lines.

For years I've been putting off just spending one day going to the local Big Amusement Park. Nerves is what stopped me, I guess. I was going to NEW JERSEY. Alone. That's enough to make anyone a wreck with the anxiety. But having time off for the first time in months and drinking lots of Coke cans with the coupon on the side is what finally prompted me to try to pull this off.

So last Thursday, two and a half hours and a faulty GPS later, I had made it to what's pretty much the best amusement park in the Northeast. 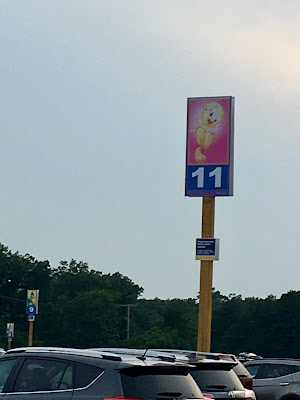 Say it with me folks: We're parked in the Itchy Lot. Because I went in the middle of June, school was technically still in session and that meant barely any waiting for any of the rides. Everything I either got right on, or waited about 15 minutes max. For a park that sees hour-long lines enough to declare a War on Lines back in the 90s, being able to immediately hitch a ride on El Toro, my vote for the best coaster in the park, is what made this whole trip worth it to me. No line for the back row whatsoever, and being able to get right back on because no one else was waiting is nothing short of a miracle. 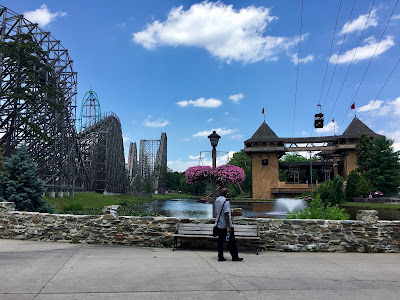 That's El Toro to the left, still as picturesque as it had been. Thanks to the magic of Facebook reminding you of stuff you did years ago, I made this trek exactly four years to the day of my last visit, which is pretty neat in and of itself. And as luck would have it, I also took a picture in pretty much the exact same spot. 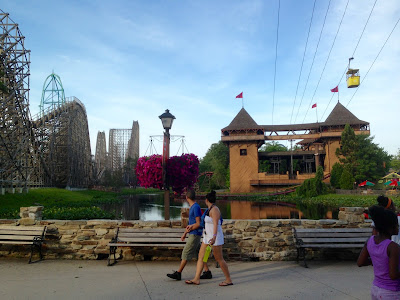 That picture is honestly one of the best pictures I've ever taken. There's just so much going on. Really, the main difference between the two is that the 2017 picture above has Zumanjaro added on to Kingda Ka. It's an enormous drop tower that takes you to the top of the coaster, some 450 feet off the ground. I'll admit I chickened out on riding it a few times, but after pacing around for a bit, I said "to hell with it" and jumped right on. Again, there was no line but we had to wait our turn because Six Flags didn't think things through and couldn't run that and Kingda Ka at the same time. Damn you, physics.

My buddy Jay over at The Sexy Armpit says that roller coasters are a type of therapy to him, being able to strap yourself in to be tossed around through loops and whatnot puts a lot of problems in perspective, and I'm going to agree. After falling 450 feet at around 90 mph, my one thought was "I'm alive." Suddenly everything I was stressed out about had vanished for the day, and that I could conquer anything. 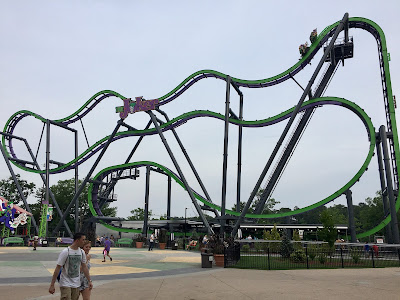 Like this bad beast, The Joker. One of those 4D coasters that's been getting put into other Six Flags parks. Up until a few years ago, one of the only coasters of its kind was X (now X2) at Magic Mountain in California.

Crazy, isn't it? Because it was the first of its kind, where the ride cars flipped you around while you were going around the track, it was plagued with its own set of problems for years. For the first few years of its life, it had to be closed on Wednesdays just for maintenance. These newer models seem to be much simpler in design, but downtime is still a problem. This thing's been open for what, a year or two and I had to wait for this to finish testing after working all day.

The coaster itself isn't all that intense, but those flips really take you by surprise, especially the first one; you can see it above. A few hours prior, I was riding this ride called El Diablo, which is a kind-of roller coaster that just spins in a loop and you just hang there at the top for a while.


I'm not a fan of those kinds of rides, but after riding stuff like El Toro and Bizarro (a floorless coaster, which is awesome), it wasn't as bad as I thought it would be. But the kid next to me was NOT having it, freaking out and everything. All I could do was laugh and ensure the guy that it wasn't so scary as he was making it out to be. I'm still not going to go on one of those pirate ship rides anytime soon, though.

Well, on The Joker, I was in that role, and the little kid sitting next to ME had to reassure me that it wasn't as scary as we thought. Within those few minutes, we became fast buddies that just experienced a war. Like Jay said, it puts everything into perspective. 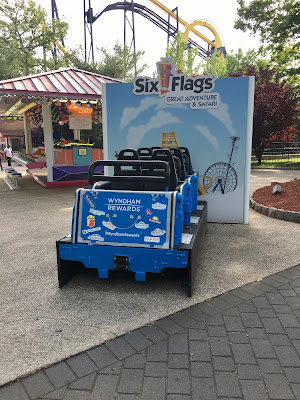 Speaking of the dearly departed Rolling Thunder, this is what's left of it. Once a pair of racing wooden coasters, it's been reduced to a dumb photo op. The rest of its cars are scattered around the park, and you can see most of them when you're on line for El Toro. 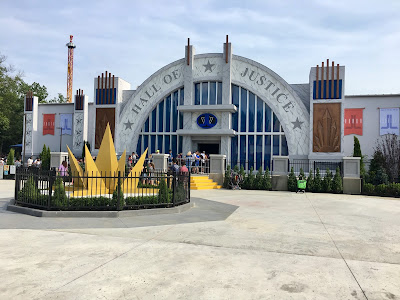 (Ted Knight voice) MEANWHILE, AT THE HALL OF JUSTICE!

This was the park's newest ride, Justice League: The Battle For Metropolis. It's a dark ride where you get to shoot things, not unlike Buzz Lightyear Space Ranger Spin or Toy Story Mania at Disney World. But unlike those rides, you're wearing 3D glasses so you get to shoot at screens where various robots and baddies try to pop out and attack you. The story is that the Joker and Lex Luthor have kidnapped most of the major DC heroes, so the Justice Leagues recruits ordinary citizens to do their dirty work, and whoever gets the most points wins the war, I guess?

I was reading up on this, since it opened the week before I got there and heard nothing but rave reviews and lots of hype. Well, I'll tell you one thing, I think this ride delivers. Disney and Universal might be at the top when it comes to immersing yourself into the experience of the ride, but this does the immersion thing pretty damn well. The 4D effects are loads of fun, there's a few animatronics scattered about (including a sweet Joker one), and there were times where I totally forgot I was even on the ride, I was so focused on shooting things that a simulated loop caught me off guard.

The only problem is that it's really hard to tell your lasers apart from the five other people riding with you, so you don't know who really gets the kills until you see everyone's score at the end. Other than that, I give this a solid A. If the line wasn't nearly an hour long, I would've definitely gotten back on to try it again. That's the sign of a great ride, folks. 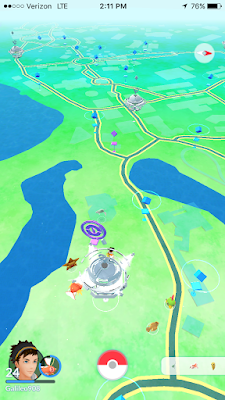 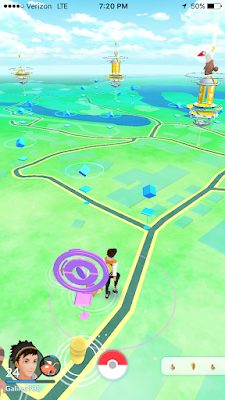 And of course I needed to see what this place looked like in Pokemon Go. There are Pokestops everywhere, and as luck would have it, the gyms came back online while I was there. Niantic finally got their act together when it came to gyms, and now you can access them like Pokestops, and doing so earns you its gym badge. They're nothing more than a picture of where the gym is in real life, but it's good enough for me. I'm actually sad that I only have four out of five badges that are in the park. Hey, it was late in the day and I was tired of walking, so sue me. It gives me an excuse to go back. 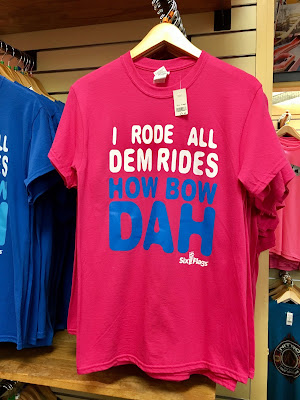 Bleh, no. I love tourist places, but I hate it when they try to cash in on the latest meme, one that's not even that good in the first place! There were also fidget spinners at just about every stand in the park, and even those were at inflated theme park prices at ten dollars a pop. Needless to say, I bet that their next ride will be built out of all the ones they weren't able to sell. 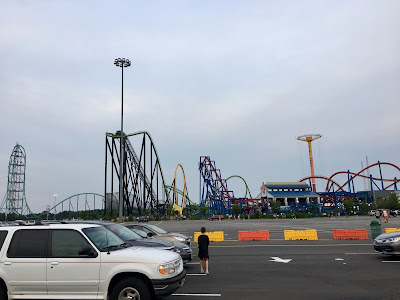 I didn't want to leave, really. But it was 8pm, and the Mass Exodus had everyone shuffling out of the park. But I was beat. A good kind of exhaustion, but it was exhaustion all the same. Seriously, I went last Thursday and my legs didn't stop hurting until yesterday.

But all in all, it was probably the best day I ever had at Great Adventure. Aside from Skull Mountain (closed) and Kingda Ka (didn't ride), I was able to hit up every coaster in the park. My top three: El Toro, Bizarro, and Nitro I was able to hit twice. I could've spent the entire day just getting back in line on any of those coasters, but I wanted to make the most out of my time, and I think I certainly did. Justice League was the longest ride I had to wait for, and that's because it was new. If a 50 minute wait was the norm for when this place was dead, I don't want to know how long it'll be in the middle of July. If anything, some of these lines were too short. Looney Tunes cartoons play on TVs while you're waiting and I had to miss a lot of them because I wasn't standing around.

Would this day had been better if someone else was with me? Absolutely. But going solo is its own experience, you get to make tons of new friends in line, and riding and you get to compare which coasters were better, or comparing stories at being at other places. And do not underestimate the value of being a single rider, you get to bypass a lot of the lines. And on crazy days, it's the best option to get the most out of your day.

Oh, and be sure to check out the sidebar, I finally cleaned it up a little bit.