If I Won The Lotto 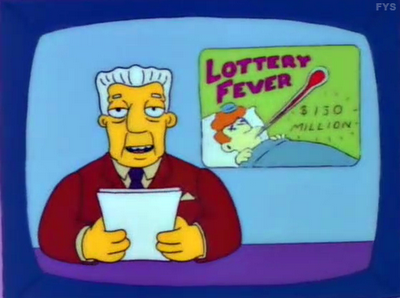 "Son, if you really want something in this life, you have to work for it. Now quiet! They're about to announce the lottery numbers." - Homer Simpson

Well folks, the $640 million Mega Millions jackpot has came and went without me as a winner. Not even the freaking Mega Ball Thing! And it was 23, my favorite number! So I regret to inform you that there will not be a $640 million keg party thrown by yours truly. At least, not for now.

But this whole Lotto Fever had gotten my brain moving: Just what the hell would I do with $640 million? Even after taxes, it would be around $300 mil, but that's still enough money to disappear from the planet. It just so happens that I've actually put some thought into this:

1) Keg Party for all my friends. That jackpot would've given enough money for me to just buy a house to party in, trash the hell of of it, never use it again, and still be set for life. And I won't be filling those kegs with Bud Light. No, I'm springing for better stuff: Regular Bud!

2) Charity. Yeah, yeah, typical answer. But I'm serious. There'd be a few organizations I'd donate to here and there, but there is one definite. My fraternity has a scholarship fund to honor a brother that passed away back in 2003. It takes $25,000 to fund it, and I'd pony up either the full thing or how much is left to currently endow it. Whichever one comes first.

3) Go to Every Amusement Park in the Country. At first I thought "Do I wanna go to Disney World or Disneyland?" Then I realized that money, and therefore time, would be no object, so my answer would be one group of parks, then the other. I'd do Cedar Point in between, too.

4) Pay off what's left of my Student Loans. Also obvious.

5) Vegas. Again, obvious. Don't know how much of my wad I'd blow in that town, but that place is a definite. I've never been there, so I might just buy a casino or two while I'm there for the hell of it.

6) Move out of my house and get a new car. Another obvious answer. I'll move somewhere nice or five.

7) Transformers shopping spree! There's a good load of transformers that I don't have yet, and they don't come cheap. I'd fix that in an instant.

8) Buy someone. Don't know who exactly I'd buy just yet. Maybe a Simpsons writer from the current era and pay him enough money to dance for my amusement as punishment for the sub-par episodes he'd help write.

So that's my plan. What's yours?