Part 30 in my ongoing "Soundtracks For Summer" series

Allright folks, it's June, we're in the midst of summer and I want to write about a cheery little summer song for the thirtieth time. So I hope you sit back and enjoy the ride.


This little gem was brought to us by Freddy "Boom Boom" Cannon and Chuck Barris (yes, the guy that hosted The Gong Show) from way back in 1962. Another gem from the Surf Rock era, this song was about, well, Palisades Park in New Jersey. And, okay, let's admit it. It was yet another metaphor for sex. But back to the park, this place had the works: rides, roller coasters, the Tunnel of Love, an animal freak show, and a wave pool decades before every park had one.

The park itself had been operating since 1898, making it one of the oldest and well-known amusement parks in the country. So why did this park close in 1971? Believe it or not folks, one of the major reasons was that it was TOO popular. You see, since it's in New Jersey, it had a prime location away from New York City and everyone knows that one of NYC's major exports has always been traffic. Traffic going to the park, coming from the park, and nowhere to park the cars. Can't get there, can't park there, can't get out. Certainly a recipe for success in post-war America. This song had only helped this place get MORE popular, too. Kinda ironic when you think about it.

Why does this song remind me of summer? Obviously, it's about spending the day at a amusement park with someone you love. Could be a best friend, an awesome cousin, or a whole group of people, you shouldn't be alone at a fun park.

Also awesome: This song was also covered by The Ramones!


Palisades Park was just a popular park at the time, surely Freddy (and later Joey and the gang) would've sang about a different park had he recorded it today. Perhaps, say...Six Flags?

Okay, that was a cheap attempt at a segue but that was to goad you all into seeing my pictures from my Great Adventure trip two Saturdays ago. Man, that's a great picture. And that was taken on my phone to boot! I never got quality that awesome before. And I went on a perfect weather day. Nearly clear of clouds, sun, and not TOO hot. It only got too hot when you're, you know, just standing right in the sun for long periods of time. But not too bad.

Answer: Not as bad as they thought they were gonna be, especially for a Saturday in June with gorgeous weather like that. The average wait time for a coaster was roughly an hour, but for THOSE rides, that's still pretty decent for this time. 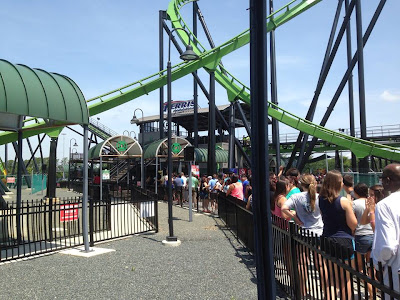 For instance, this was Green Lantern's line. At roughly 40 minutes, this was one of the shortest waits I had all day. And this was after my group going to Superman: Ultimate Flight's line, seeing it was 90 minutes long and soundly said "NOPE" to it. Green Lantern was one of those neat Stand-Up coasters. That's where you ride while standing on a bike seat the entire time. Add the fact that I love all things Green Lantern and you have a hell of a great ride. To think that Great American Scream Machine stood on this spot. Good riddance. 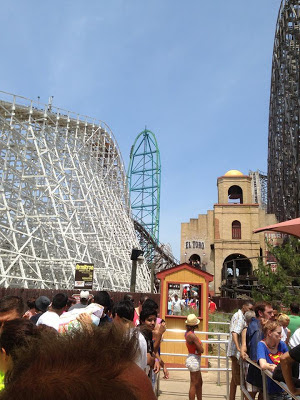 This was El Toro's line. Roughly an hour to get on, but so worth every second spent in the sun. See that tiny thing in the upper left? That's Kingda Ka actually being consistent for once. My group (which consisted of myself, my cousin and a bunch of her co-workers) came by bus and were we not worrying about catching it back home, we would've waited on the line for it. That one was about 45 minutes, an hour at most! Kingda Ka! It's gonna be ages until I get that chance again. But we made the bus, thankfully. 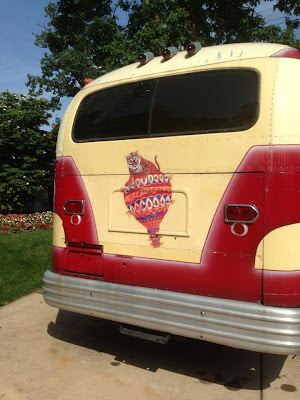 Speaking of buses, they have a replica of the bus they used to have in those annoying dancing old man commercials. This one had the sweet original Great Adventure logo on it. 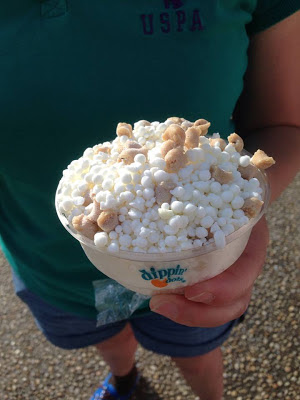 Amongst other things I got to do for the first time that day was try Dippin' Dots for the first time. The Ice Cream of The Future™ tasted just like regular ice cream...except in little ball form. I think I'll just stick to the regular kind, not this overpriced version from now on. You know, I always get reminded of that old "Chef of The Future" bit from The Honeymooners whenever I look at Dippin' Dots. It could explain why "the future" is only relegated to theme parks for the time being.

And before we left, I knew I HAD to get a ride picture with everyone. 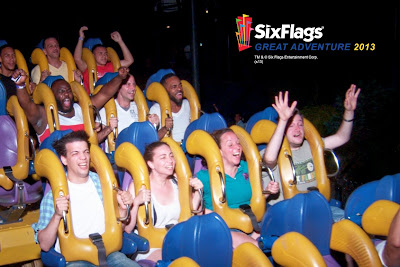 I was gonna get this picture from Bizarro anyway, but see that guy in the middle row? You see him? You know the one I'm talking about. He's pretty hard to miss. He's the reason why I took one look and said "I HAVE to buy this!" I, as well as everyone else looks ridiculous. Except for this guy. Whoever he is, if he's out there and somehow stumbles across this: please know that he is awesome.